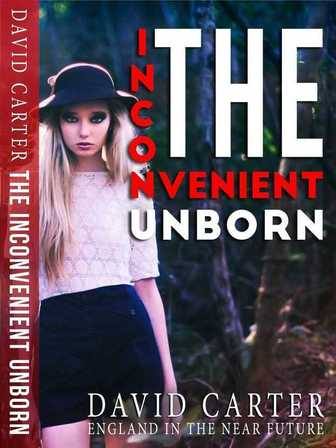 England in the Near Future

England in the near future.

The Cazenoves and the Wilsons don't get along, leastways the parents don't - the teenage kids adore each other, but when the oldest Wilson girl falls pregnant, sparks fly.

Donald Cazenove just happens to be Fred Wilson's boss, but Fred isn't without influence himself, being the senior shop steward, and the business is struggling anyway, and a strike could play havoc with Donald's figures.

The Inconvenient Unborn is set in England in the near future where after years of austerity, a left wing Labour Party has been returned to power with a huge majority, and they now intend to change Britain forever. They have a mandate. They have conviction. They have momentum.

And then there's a state visit to Britain by the most powerful man on the planet, Yuri Premakov, the Russian President, and his precocious and very beautiful film star wife, Tamara, bringing gifts of gas and oil and energy, at a price, and he's scheduled to visit Lymington on the south coast, where most of this book is set.

So who wins out? The Cazenoves or the Wilsons, and what exactly are Yuri Premakov and his vast entourage up to in Britain?

"The Inconvenient Unborn" will take you on a journey you can barely imagine.

Here's what some early readers have said about the book:

"I was hooked from the very first page as I think others will be too. I confess I shed a tear."

"I loved the inter-weaving of the relationships and of course the ending, one of hope out of despair."

"I will definitely recommend it, although I have a sneaky suspicion it will be a success anyway."

"The Inconvenient Unborn" is OUT NOW in paperback and as an ebook.

A cross generational novel with David Carter capturing the painful emotions of growing up and the impact this has on the lives of parents, two sets, two families from different ends of the social strata.

Their young see no barriers and we are given an insight into the longings and desires of growing adolescents anxious to live the excitement of first love to the full, but where will the opportunities lie?

School life isn't exactly conducive to the fulfillment of desire and David Carter sets an entertaining and amusing trail as the search for suitable accommodation for Tracey Wilson and Oliver Cazenove takes more than a little improvisation.

The Cazenove lads have great aspirations, their upbringing playing no small part, whilst the Wilson girls aspire, just now it's only to these well-heeled lads. Their household, though no financial match, is not without the courtesy of good manners. The girls are not lacking a sound upbringing and being sharp as knives the three of them, they prove more than a match for the Cazenove boys whose father Donald Cazenove CEO is boss at Bestdas Stores, Lymington which happens to be where their father works.

He may be subject to the whims and fancies of Donald Cazenove but Fred Wilson's power lies elsewhere. There's no power like that of a senior shop steward and Fred Wilson knows exactly how to wield it, not with Sally Youngs though. Desperate for promotion he keeps a close eye, given she's driving hard to get there first.

Carter injects delightful humour into this clever scenario all bound in with the politics of the day. Bobby Walker the Prime Minister, with far left leanings, is the Wilson's hero, on course to turn the country into a republic to the disgust of the Cazenoves.

Furthermore to the Wilson's delight he's engaging with the Russian president, brokering deals to keep the nation's gas on tap, and much else.

Of course there's a price to pay, but at what cost? Can Bobby Wilson pay the price? Yuri Prmakov is certainly no fool.

The story unfolds with intrigue as the political action develops and tightens into a very tense page-turning scenario, the denouement taking me completely by surprise.

Carter is a highly astute observer bringing credibility to his work. The reading of this book proved sheer entertainment. He delivers an easy style which is very clever and the comfortable occasional narration truly brings the characters to life.

It's not difficult to enjoy David Carter's books whatever the genre as long as you can deal with the shocking, for he will never leave the reader lacking in anticipation or excitement.

An excellent book which deserves to be read, I can but highly recommend it.

And here's another review from Christine of Hawarden:

I must admit to starting it ages ago and whilst I found it quite prophetic and interesting at the start, I became a little tried of it and was tempted away by other books I had bought or borrowed that drew me to abandon it for a spell..... however, I returned to this book as I never like to leave a book unfinished and decided to persevere with it.

I quickly realised that it was just a little hiatus in an otherwise compelling story and I became engrossed wondering how it was all going to pan out I won’t spoilt it by saying too much but that there was a completely unexpected turn that made me even more riveted !!!

In my opinion David Carter has a really insightful imagination and I find myself wondering what other novels he has yet to pen set in “the near future” and hope he doesn’t keep his readers waiting too long to find out !!!"

"The Inconvenient Unborn" is now available on most well known ebook platforms.

Buy on Kobo by clicking here

Buy on Nook by clicking here

Here's a large extract from the book:

Thanks for reading so far. To carry on reading you will need to buy a copy of the book.

You can buy an ebook right now for only £2.99, and you can continue reading the story in a matter of minutes.

Thank you for your interest - I appreciate it!

Buy on Kobo by clicking here

Buy on Nook by clicking here